Moved away
Hortence (Grey DeLisle) is a minor character on Dan Vs. She was Dan's former love interest who worked at the fast food chain, Burgerphile.

Hortence wears what seems to be the female version of the Burgerphile uniform: Orange shorts and a plain shirt t-shirt with a hamburger image on it, complete with an oversized burger hat. She has long brown hair, dark eyes, and freckles. She also appears to have slightly pointed ears.

In The Wedding, Hortence's new uniform is an orange suit jacket over a white top, and chocolate colored pencil skirt and pumps.

Hortence was probably the only human being that is not repulsed by Dan when he is vindictive or plotting revenge. In fact, she is attracted by it and thinks Dan is pretty bold for standing up for what is right. She is very sweet and considerate, and also takes her job as a customer service representative very seriously.

In Burgerphile, Hortence's self serving boss tries to talk her into using her relationship with Dan to manipulate him into leaving the restaurant after her boss intentionally got Dan's order wrong. The boss says she can become assistant manager if she can get Dan to leave. But Hortence would never cross Dan because she likes him too much. Disobeying the manager's orders, she decides to join Dan in protest, especially since her boss wouldn't let her correct Dan's order.

Because Hortence did the right thing, the owner of Burgerphile, Jeremiah Burger, rewards Hortence by promoting her to regional manager at the Burgerphile corporate headquarters in Santa Monica, 20 miles away from the Burgerphile restaurant near Dan's neighborhood.

She later returns in Season 2's The Wedding, as the Regional Manager and announces she is to be married to the owner of the Burgerphile chain, Jeremiah Burger, which drives Dan insane with jealousy.

In an attempt to win her back, Dan tries to sabotoge the wedding, but obviously does the complete opposite and completely wrecks whatever relationship he had with Hortence.

Dan has had a crush on Hortence since the first season, in Burgerphile, when Jeff got his order wrong, he stood up for himself and demanded he get his order right, Jeff refused and Dan chained himself to the order counter in response. Hortence liked Dan for being bold and standing up for what he thought was right.

Jeff tried to get Hortence to manipulate Dan with his feelings, but she refused and chained herself with Dan in protest. Eventually, Hortence was rewarded for her actions and became regional manager, but this meant she had to move away from where Dan lived. Despite her new home only being twenty miles from Dan, he acted like she was gone forever and couldn't see her again.

When Hortence eventually did return in Season 2, she was getting married, which made Dan extremely jealous. Dan had various attempts to sabotage the Wedding (trying to get Hortence to call it off, destroying it from the inside as a Bridesmaid, and unintentionally destroying the Chapel after trying to sky write his feelings for Hortence) but his attempts to win her heart only made their relationship worse and Hortence ended up moving even farther away from Dan with no promise to ever visit him again.

When Hortence helped Dan stand up for himself in "Burgerphile", she was promoted by Mr. Burger to regional Manager of Burgerphile, which caused her move closer to him.

They developed a relationship during Hortence's absence from the series which led to them getting married in "The Wedding".

Hortence is aware that Mr. Burger has several ex-wives and is okay with that. 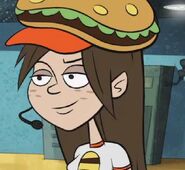 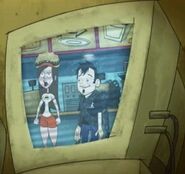 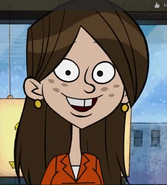 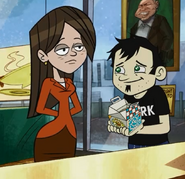 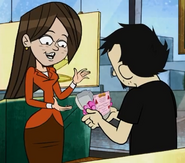 "I understand if you can't make it." 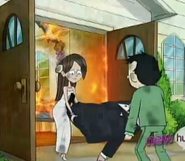 I didn't mean to ruin your wedding. Well, actually I did..." 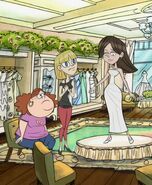 Hortence And Her Friends

Community content is available under CC-BY-SA unless otherwise noted.
Advertisement